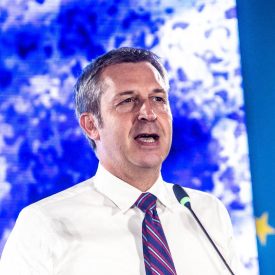 M. Della Vedova has been Under Secretary of State for Foreign Affairs and International Cooperation from February 2014 to May 2018. In this capacity he was responsible for the relations with Asia-Pacific countries, Canada and Mexico, for supporting the internationalization of Italian companies, and for economic and financial matters related to the G7 and the G20.
M. Della Vedova has a long-standing political career, both in Rome and Brussels: he was a member of the Italian Senate (2012-2018), of the Italian Chamber of Deputies (2006-2013) and of the European Parliament (1999-2004).